Users building and supporting enterprise applications require end-to-end visibility, but most apps are composed of different services hosted in different environments and managed by different teams, which leads to a tendency for teams to be siloed with their own views and tools.

Today's enterprise companies continue to innovate on top of existing systems and require improvement and visibility into legacy systems such as the mainframe.

If there is a problem, how do IT Ops teams identify where the problem is located, and who to call? Teams need to manage complexity and quickly get a clear picture of all of the components on which their business applications run.

IBM and AppDynamics have already created a strong partnership across a number of different areas. Now, AppDynamics has partnered with IBM to provide transaction visibility into the mainframe subsystems using the IBM z APM Connect product offering.

Note: The Mainframe Agent will consume 1-5 C++ SDK instances in the Controller. As this requires a purchase of AppDynamics licenses, this will already be covered.

The Mainframe licensing requires the use of 1 AppDynamics Pro license for every 16 Value Units of Mainframe capacity in addition to the IBM license requirements for the IBM z APM Connect product.

As shown in this diagram: 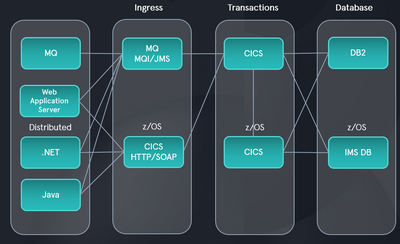 Requirements include a z/OS Mainframe, AppDynamics and a gateway box. 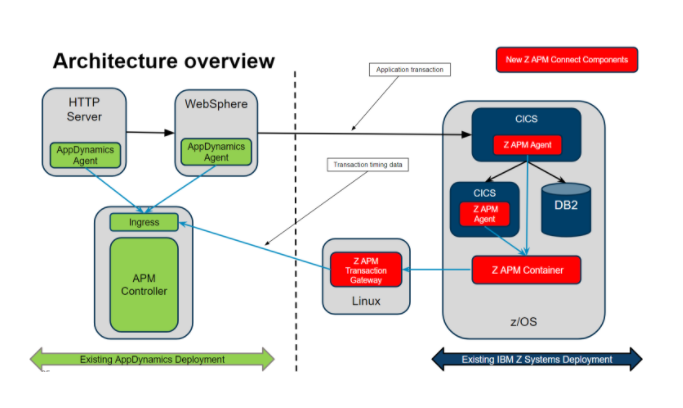 Hi, can you point me to where I might find the hardware requirements for the Transaction Gateway server?

Also can this component reside on the Controller server?

Hello, Tom. You can find the full documentation here: https://www.ibm.com/support/knowledgecenter/en/SSYHZ9_5.5.0/com.ibm.omegamon_apm.doc/overview/zapm_o... to answer your question we don't really have any requirements for that system since it's not a system doing a lot of work. It can be installed on any Intel Linux system really. We had some preliminary hardware requirements, but during load testing, we found it needed far fewer resources. I will check with the product team just to verify this.

We now support additional subsystems with this including IMS, VSAM, and outgoing WebSphere.